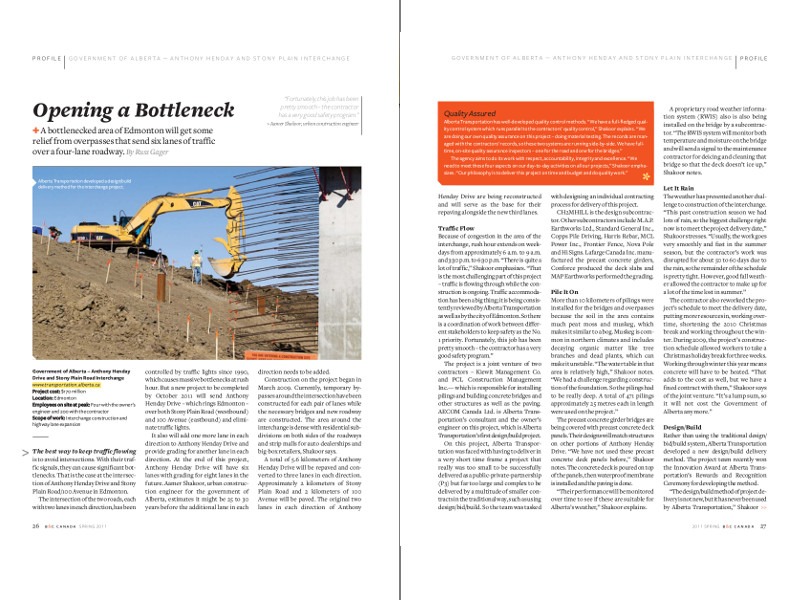 This article was originally published in the Spring 2011 “Building & Construction” Magazine, published by Mayfair Business Media.

A bottlenecked area of Edmonton will get some relief from overpasses that send six lanes of traffic over a four-lane roadway.

The best way to keep traffic flowing is to avoid intersections. With their traffic signals, they can cause significant bottlenecks. That is the case at the intersection of Anthony Henday Drive and Stony Plain Road/100 Avenue in Edmonton. The intersection of the two roads, each with two lanes in each direction, has been controlled by traffic lights since 1990, which causes massive bottlenecks at rush hour. But a new project to be completed by October 2011 will send Anthony Henday Drive – which rings Edmonton – over both Stony Plain Road (westbound) and 100 Avenue (eastbound) and eliminate traffic lights.

Construction on the project began in March 2009. Currently, temporary bypasses around the intersection have been constructed for each pair of lanes while the necessary bridges and new roadway are constructed. The area around the interchange is dense with residential subdivisions on both sides of the roadways and strip malls for auto dealerships and big-box retailers, Shakoor says.

Because of congestion in the area of the interchange, rush hour extends on weekdays from approximately 6 a.m. to 9 a.m. and 3:30 p.m. to 6:30 p.m. “There is quite a lot of traffic,” Shakoor emphasizes. “That is the most challenging part of this project – traffic is flowing through while the construction is ongoing. Traffic accommodation has been a big thing; it is being consistently reviewed by Alberta Transportation as well as by the city of Edmonton. So there is a coordination of work between different stakeholders to keep safety as the No. 1 priority. Fortunately, this job has been pretty smooth – the contractor has a very good safety program.”

The project is a joint venture of two contractors – Kiewit Management Co. and PCL Construction Management Inc.— which is responsible for installing pilings and building concrete bridges and other structures as well as the paving. AECOM Canada Ltd. is Alberta Trans portation’s consultant and the owner’s engineer on this project, which is Alberta Transportation’s first design/build project.

On this project, Alberta Transportation was faced with having to deliver in a very short time frame a project that really was too small to be successfully delivered as a public-private-partnership (P3) but far too large and complex to be delivered by a multitude of smaller contracts in the traditional way, such as using design/bid/build. So the team was tasked with designing an individual contracting process for delivery of this project.

More than 10 kilometers of pilings were installed for the bridges and overpasses because the soil in the area contains much peat moss and muskeg, which makes it similar to a bog. Muskeg is common in northern climates and includes decaying organic matter like tree branches and dead plants, which can make it unstable. “The water table in that area is relatively high,” Shakoor notes. “We had a challenge regarding construction of the foundation. So the pilings had to be really deep. A total of 471 pilings approximately 25 metres each in length were used on the project.”

“Their performance will be monitored over time to see if these are suitable for Alberta’s weather,” Shakoor explains.

A proprietary road weather information system (RWIS) also is also being installed on the bridge by a subcontractor. “The RWIS system will monitor both temperature and moisture on the bridge and will send a signal to the maintenance contractor for deicing and cleaning that bridge so that the deck doesn’t ice up,” Shakoor notes.

“Fortunately, this job has been pretty smooth – the contractor has a very good safety program.” Aamer Shakoor

The weather has presented another challenge to construction of the interchange. “This past construction season we had lots of rain, so the biggest challenge right now is to meet the project delivery date,” Shakoor stresses. “Usually, the work goes very smoothly and fast in the summer season, but the contractor’s work was disrupted for about 50 to 60 days due to the rain, so the remainder of the schedule is pretty tight. However, good fall weather allowed the contractor to make up for a lot of the time lost in summer.”

The contractor also reworked the project’s schedule to meet the delivery date, putting more resources in, working overtime, shortening the 2010 Christmas break and working throughout the winter. During 2009, the project’s construction schedule allowed workers to take a Christmas holiday break for three weeks. Working through winter this year means concrete will have to be heated. “That adds to the cost as well, but we have a fixed contract with them,” Shakoor says of the joint venture. “It’s a lump sum, so it will not cost the Government of Alberta anymore.”

Design/Build Rather than using the traditional design/ bid/build system, Alberta Transportation developed a new design/build delivery method. The project team recently won the Innovation Award at Alberta Trans portation’s Rewards and Recognition Ceremony for developing the method. “The design/build method of project delivery is not new, but it has never been used by Alberta Transportation,” Shakoor explains. The design/build procedures and practices were developed to suit and meet the local requirements. The design/ build procurement process was designed to incorporate all the benefits and efficiencies of the P3 or design/build/finance/ operate process – to ensure low cost and timely delivery – as well as the rigorous independent quality assurance procedures involved in design/bid/build contracts to ensure top quality.

The team worked closely with contractors and consultants to ensure it had a clear understanding of how the new system of procuring construction work would affect the service providers who would be delivering the work.

“The result is a very successful procurement process that generated a lot of industry interest and is successfully delivering a very complex project to the highest standards of quality, at a very low price within a very short time frame, with minimal disruption to existing traffic and local businesses,” Shakoor asserts.

“This is a very fast project, because the construction timeline for seven bridge structures is just under three years, which is pretty quick,” Shakoor asserts. “It took us almost a year to prepare the technical requirements and the project specifications. So it was about a full year before the actual construction started.

No changes in the project were required to fit the budget because the bids came in under budget. “When we awarded this project, the industry was very competitive, and contractors were prepared to do the work at lower margins,” he recalls. “So there were quite a few companies who were interested in getting this work done, and this was reflected in the good tender price.”

He thinks lower materials costs for concrete and steel may have contributed to the lower bid, along with the fact that Kiewit and PCL are local companies, which may have given an advantage to the joint venture with its knowledge of the area.

A functional planning study was initiated by Alberta Transportation to develop long-term interchange plans for highway 216 (Anthony Henday Drive) (AHD) and Highway 16A (Stony Plain Road and 100 Avenue). The objectives of the study were identified as follows:

The recommended first and longterm stage plans require seven new bridge structures for the first stage improvements. The major findings and recommendations of the study are described briefly as follows:

» Systems interchange configuration has been developed AHD/Highway 16A to meet the traffic demand for the 1.6 million Edmonton regional population (expected in about the year 2040). The configuration can be upgraded to meet the long-term traffic demand through the addition of ramp and through lanes and implementation of “basket weaves.” Bridge structures should be constructed to the long-term stage requirements or be able to be readily upgraded. If possible, grading for the long term should be completed in the first stage of the overall project.

» Interchange modifications are required at the 87 Avenue interchange in the first stage to facilitate weave requirements between Whitemud Drive, 87 Avenue and 100 Avenue/Stony Plain Road. The loop ramp in the northeast quadrant will be eliminated and replaced by a loop ramp in the southeast quadrant. No structural changes to the bridge will be required in the first stage, but bridge slope modifications and/ or barrier protection will be required. In the long-term stage, 87 Avenue interchange will be converted to a diamond configuration and the “basket weave” ramps, constructed between Whitemud Drive and 87 Avenue (east side), will require modification. The basket-weave bridge, constructed in the first stage, would accommodate the reconstructed ramps.

» 109/111 Avenue access to Anthony Henday Drive will be converted to right-in/right-out accesses as part of the first stage improvements. A Parclo configuration will meet the anticipated long-term traffic on 111 Avenue. Implementation of this interchange will be driven by traffic demand, city network and development.

» The 111 Avenue interchange is not included in the first stage plan but is expected to be required within 10 to 15 years. The interchange will trigger the requirement for the long-term improvements (basket weaves) on AHD between Stony Plain Road and 111 Avenue.

» The first stage Anthony Henday Drive improvements include upgrading to a six basic lane freeway, with auxiliary lanes as warranted, from north of Whitemud Drive to north of 111 Avenue (south of CN Rail structure). The outside lanes would be constructed in the initial stage such that future widening (to eight basic lanes) will be to the inside (into the median). This approach will facilitate construction of many of the ultimate ramp tapers, gore areas, etc. during the intermediate stage when basket weaves are required or 111 Avenue interchange is constructed. This eliminates the need for sliver and very narrow widening when upgrading in the future.

The median width on Anthony Henday Drive, within the study area, will also be widened from 20.1 metres to 23.2 metres to meet current freeway standards. It is suggested that the asphalt surface within the widened area be removed in the first stage. Further evaluation should be completed to determine the feasibility of removing the granular base and insulation, where it exists in the area, which will be required for future widening.

» The study is located within an area of difficult geotechnical conditions, which include high water table, frost-susceptible soils, soft and highly compressible subsoils, and peat-like conditions. The geotechnical conditions will require special considerations for design of the project. Additionally, an extensive geotechnical program and report have been completed in conjunction with this functional planning study.

Alberta Transportation has well-developed quality control methods. “We have a full-fledged quality control system which runs parallel to the contractors’ quality control,” Shakoor explains. “We are doing our own quality assurance on this project – doing material testing. The records are managed with the contractors’ records, so these two systems are running side-by-side. We have fulltime, on-site quality assurance inspectors – one for the road and one for the bridges.” The agency aims to do its work with respect, accountability, integrity and excellence. “We need to meet these four aspects on our day-to-day activities on all our projects,” Shakoor emphasizes. “Our philosophy is to deliver this project on time and budget and do quality work.”